We have seven bucks:
Fabio is a Harlequin / English Lop / Mystery cross born 6/21/16 to Penelope and Sushi. He weighs 8.5 pounds.
Servine came to us 3/19/18, he's a blue otter Rex buck, over one year old, weighing in at 7.5 pounds at arrival (6.5 pound as of July 2018).
Yang has been kept back to replace Ulysses (his father) as our main meat breeder buck.  He was born 7/5/18 to Gretchen and Ulysses.
Little Timmy is an Holland Lop, this blue eyed white buck was purchased at auction 10/13/18.
Mister Cellophane is a silver marten Jersey Wooly buck.  Purchased at auction 10/13/18
Celery is a Jersey Wooly Buck, he's a broken black (or possibly broken chocolate or something else?), he came to us very matted.  Purchased 10/13/18 from the auction.
Boyce was born 5/15/19 and is out of Calliope (Holland Lop) and Mister Cellophane (Jersey Wooly).  He was born white but quickly developed agouti color and points.  His pink eyes make identifying his color difficult.  He was named in honor of actor Cameron Boyce.


We have fifteen does:
Gretchen is a New Zealand / Californian cross born 6/21/16, she is out of Lola and George. She weighs 9 pounds.
Feather is a Harlequin / English Lop / Mystery cross born 6/21/16 out of Penelope and Sushi. She weighs 7.5 pounds.
Kaelyn was born 4/17/17, she is out of Charlotte and Sushi.  She is a Vienna carrier, and she weighs in at 9.75 pounds.
Lilith was born 4/18/17 to Bennett (Harlequin / New Zealand Red) and Gretchen (New Zealand Black / Californian).  Grandparents were Dora (Harlequin), Porkchop (New Zealand Red), Lola (Californian / New Zealand Black), and George (Californian / New Zealand Black).  Bennett, Porkchop, Lola and George all took ribbons at the county fair.  Lilith weighs 7 pounds.
Princess Poppy (pointed, 7.5 pounds) and Pocahontas (white, 7 pounds) were born 7/7/17 to Snowflake and George, which makes them 1/4 NZW, 1/4 Flemish Giant, 1/4 Californian, and 1/4 NZB.  They were kept back to increase our meat production lines.
Quince was born at around 1:30 am on 7/8/17 to Caduci and Fabio.  She is broken black.  She weighs 8.75 pounds
Rhona was born 8/28/18 and is out of Snowflake and Ulysses, so she is New Zealand White / Californian / New Zealand Black / Flemish Giant.
MooMoo the Holland lop doe joined us 8/31/18.  She was 14 months old then, so she was likely born in June, 2017.  She was advertised as being broken black, but she has deep chocolate brown mixed in with her black patches.
Calliope the Holland Lop doe came here 8/31/18 with MooMoo.  She was five months old at the time, so estimated birthday of March 2018.  She's a pretty black tort.
Hazel came to us 3/7/19 when her owner lost interest.  She had been a classroom pet before that.  We don't know her breed.
Hickory - we picked up a purebred black otter mini rex doe from the 3/30/19 auction.  She will be paired to Servine once her quarantine hold is up.
Daffodil - we picked up a lop doe (not sure if she's mini or Holland lop) from the 3/30/19 auction.  She will be paired to Little Timmy.
Egg was born 4/21/19 (Easter morning).  Her dad is our very own Mister Cellophane.  We hope to pair her to Celery in 2020 for purebred Jersey Wooly babies.
Thimblenimbus is out of our buck, Celery.  We hope to pair her to Mister Cellophane when she is old enough.

We have three rabbits in the colony currently (scroll to the bottom to meet Skittles, MoR, and Phoebe).

We will be having planned litters throughout the summer months, so please check the Rabbits page for litter announcements and photos of bunnies currently for sale.

Eventually we'd like to expand our rabbit herd, so if you have a rabbit you no longer want that you'd be willing to give away, please let us know! We are not currently looking to purchase any rabbits, but we may be open to barter or trade.

Our Rabbits
Not For Sale

Fabio was born 6/21/16 to Penelope and Sushi. He is a Harlequin / English Lop / Mystery cross and weighs in at 8.5 pounds

Yang, born 7/5/18 to Gretchen and Ulysses. He was nearly twice as big as his brother (Yin). He was kept back top replace his father as our meat breeding buck.

Little Timmy was purchased at auction in October 2018. He is a purebred blue eyed white Holland Lop buck. He was purchased to pair with Calliope and MooMoo.

Mister Cellophane is a Jersey Wooly buck we bought at auction in October 2018. He was severely matted and has taken a lot of work to try to groom out. This is his "before" photo. We ended up having to cut away a lot of the matting, so I'm hoping to have a nice "after" photo in the spring once his coat has some time to grow back in.

Celery is a Jersey Wooly buck, purchased with Mister Cellophane from an auction in October 2018. He was severely matted (though not as bad as his companion). We are still working (as of December 2018) on getting him completely groomed out. We will likely have to admit defeat and cut some of the mats out, but he's looking a lot better than he was. He really looks like a little plush bunny. He's much smaller than Mister Cellophane, and a lot friendlier to groom.

Feather was born 6/21/16 to Penelope and Sushi, making her a Harlequin / English Lop / Rex cross

Kaelyn was born 4/17/17 to Charlotte and Sushi. Her blue eyes give her away as a Vienna carrier. Thanks to her dad she is also a Rex carrier.

Princess Poppy was born 7/7/17 to Snowflake and George. She's got a deep chocolate color to her points, and her nose point is the biggest we've had yet of all our pointed rabbits.

Pocahontas was born 7/7/17 and is out of Snowflake X George. She was kept back to increase our meat breeding line up.

Quince was born 7/8/17 to Caduci Mook and Fabio. She is a broken black color. 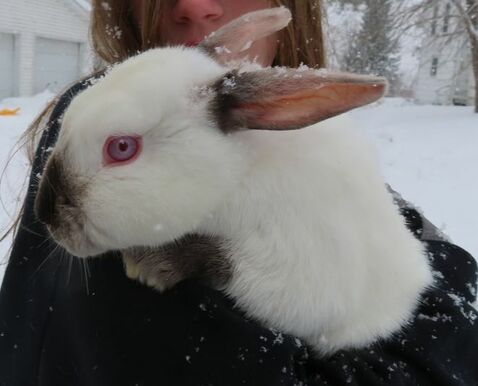 Rhona was born 8/28/18. She is out of Snowflake (New Zealand White / Flemish Giant) and Ulysses (Californian / New Zealand Black).

MooMoo the Holland Lop doe. She's supposed to be a broken black, but her black has brown in it, so I doubt she'd be showable. She does have a tattoo in one ear.

Calliope, Holland Lop doe. She was supposed to be an orange sable, but she looks more like a black tort to me. She's very pretty. Her right ear isn't always down though.

Bacon is a chestnut lionhead doe that we bought at an auction in October of 2018. She was neglected by her previous owner and had 3" long nails when she arrived.

We don't know much about Hazel. She was a classroom pet, then someone's outside pet, and when they lost interest in her, she came to us. We don't know her breed, but she was roughly a year old when we brought her home 3/7/19. 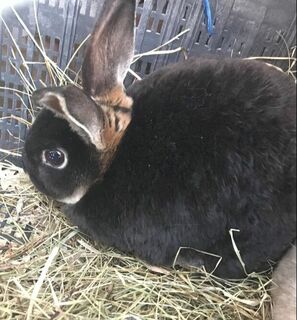 Hickory is a purebred black otter mini rex doe. We bought her at auction 3/30/19. 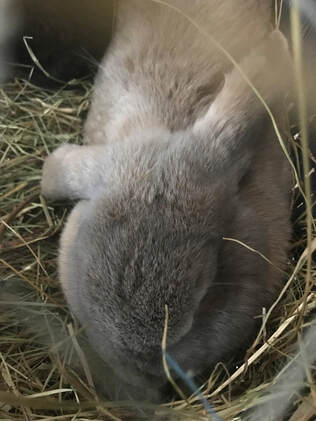 Labeled only as "lop doe" we bought Daffodil at auction 3/30/19. We are assuming she's a mini lop as she has a more "loaf" appearance, but she will be paired to Little Timmy.

Egg was born on Easter morning (4/21/19). She was our pick of the litter from when we had Mister Cellophane studded out to a fellow breeder. We plan to pair her to Celery for pure Jersey Wooly bunnies in 2020.

Thimblenimbus is out of our own Celery and we hope to pair her to Mister Cellophane when she's old enough.

In The Coop - The Colony Rabbits

We are experimenting with keeping rabbits in a colony style set up.  This is an experiment, and we're seeing if it's a sustainable option.  This may be temporary or permanent, depending on our results.  We currently have two does that live in a 10' x 10' building with a 10' x 5' fenced yard.  The colony includes: MoR and Phoebe.

Skittles was born 7/3/18 to Lilith and Rascal. We expect he will be 7-8 pounds full grown. He is Harlequin / Rex / New Zealand Red / New Zealand Black / Californian / Palomino cross. He should add a lot of color to the colony litters!

MoR (short for Mother of Ruins) is one of three sister rabbits who started our colony. She came from a farm that kept their rabbits free-range, so she's not accustomed to living in a cage. She is a Dutch / Lionhead cross weighing 6.75 pounds. MoR can be identified by her partial Dutch marking and a thin white stripe over her shoulder blades. MoR is the dominant doe in our colony.

Phoebe is a broken tort doe held back from the 4/15/18 litter out of one of the Dutch/Lionhead does (Spot, Lady Mo, or MoR) and Kin (Flemish Giant / Californian / Rex cross who was out of Charlotte and Sushi).
Want to see some of the rabbits we've had in the past?  Check out our Past Bunnies page to see photos of rabbits that have been sold.

Looking for natural rabbit fertilizer?  We sell it by the bag locally, or by the Flat Rate Priority Mail Box if it needs to be shipped.  We ship Small, Medium, and Large Flat Rate boxes.  We sell bags (refilling the 50# feed bags - though the manure typically weighs less) for $25 each (or best offer if buying multiple bags) - local pick up only.  As of right now we can only harvest/sell manure about May through October.  Because our bunnies are raised outside, freezing temperatures prevent us from harvesting/bagging in the colder months.  We hope to get a better bunny barn soon that will combat some of the cold weather enough to allow us to maintain clean up (manure harvest) throughout the winter as well.  As always, our manure often has inclusions that may include (but are not limited to) straw, hay, food pellets, fur, rabbit urine, kitchen scraps they've dropped, and occasional leaves.  Please follow this link if you're interested in buying some bunny fertilizer.